What Your Doctor Got Wrong About Kidney Disease

If you’ve been diagnosed with kidney disease, your first question to your doctor was probably along the lines of: “What can I do about it?” Unfortunately, you were probably left disappointed and frustrated by the answer.

The consensus of Western doctors is that kidney disease is a one-way journey. They say it only goes from bad to worse, and your best hope is to stall your decline with drugs before you succumb to dialysis or transplant. Along the way, you’re told to expect insomnia, muscle cramps, itching, swelling, fatigue, and a host of other unpleasant symptoms.

Like many people in your situation, you might be feeling powerless, angry, anxious, or even depressed about your diagnosis. It’s completely understandable; nobody wants to sit by and watch as their health slips away. Nobody wants to accept a future of medications, machines, and surgeries. Nobody wants to give up years of quality time with their loved ones.

But… what if you didn’t have to?

Kidney disease – is it really a one-way street?

What if your doctor is wrong about kidney disease? What if it can be stopped, or even reversed?

We tend to look at our doctors as all-knowing beings with our best interests at heart. If there was something – anything! -- they could do, surely they’d tell us?

The truth is that doctors work within a narrow, rigid medical system. There’s no doubt that Western medicine can be a brilliant thing, but the system is also far too quick to dismiss natural, holistic teachings, some of which have served us for thousands of years. If it’s not shiny, new, and made in a high-tech lab, it’s simply not valued.

And the doctors that DO try to think outside the established system? The ones that understand the incredible power and the value of what nature gave us? That try to draw from ancient wisdom and combine it with modern advances? They’re quickly red-taped and put back in their places, or cast out of the system altogether.

When it comes to kidney disease, it’s time to accept that there’s an important place for both approaches.

Yes, it can be done!

Duncan Capicchiano ND and Fiona Chin ND, both naturopaths, nutritionists, and medical researchers, have been specializing in natural kidney health for more than a decade. Their interest began when Fiona’s Nanna was diagnosed with stage 4 kidney disease at age 73.

Nanna was complaining that she felt tired and sore. When Fiona took a look at her blood test results, she was alarmed by how low Nanna’s kidney function appeared to be. When Nanna discussed this with her GP, she was stunned by the response.

Nanna had stage 4 kidney disease, but the doctor hadn’t even mentioned it. Why? He said that nothing could be done about it, so he hadn’t seen the point in bringing it up. He told Nanna that dialysis would be her only option.

A life hooked up to machines as her health slipped away? In Nanna’s eyes, he might as well have handed her a death sentence.

After the diagnosis, Duncan and Fiona set out to find natural remedies to help support Nanna’s kidney health. They poured every ounce of energy into researching and creating a healing protocol for Nanna. Even they were astounded by the power of what they found.

With the protocol they developed, they helped Nanna go from stage 4 to stage 1 kidney disease in just 12 weeks. Her creatinine went down, her GFR went up, and the looming threat of dialysis went up in a puff of smoke.

Nanna’s doctor had told her this wasn’t possible. She chose not to accept her fate, and as a result, she enjoyed another wonderful decade with her family before she passed away of unrelated causes at 83.

Based on their success with Nanna, Duncan and Fiona went on to develop the Kidney Disease Solution, an all-in-one, step-by-step approach to natural kidney healing. Since then, they’ve helped over 25,000 people to achieve similarly life-changing results.

Duncan says that, in order to have the best possible chance of recovery from kidney disease, you need to think beyond the kidneys. The Kidney Disease Solution advocates a whole-body approach, taking into account the specific causes of kidney disease.

Duncan points out that kidney failure has over a dozen known causes, including diabetes, high blood pressure, lupus, and Alport’s syndrome. By addressing the root causes of kidney disease elsewhere in the body, you can prevent these illnesses from further eating away at your kidney function.

Diet and nutrition are also major areas of importance. Conventional advice does take this into account, but according to Duncan, it doesn’t go far enough. For example, common advice is to reduce sodium and potassium intake. Solid advice, but it doesn’t cover what to eat instead. If you replace potassium-rich foods with unhealthy alternatives, you’re simply aggravating other health problems that can contribute to the decline of your kidneys.

The third pillar of the Kidney Disease Solution’s approach is to draw on the power of natural supplements from various cultures. Duncan stresses that he’s not talking about bags of roots and powders from a corner store; he’s referring to evidence-based herbal medicine in controlled, measured dosages, sourced from reputable, top-level suppliers.

As an example, Duncan points to chitosan, sugar obtained from the outer skeletons of shellfish. In one Japanese study, chitosan was given to 80 patients with kidney failure who were undergoing dialysis. In just four weeks, urea and creatinine levels had dropped significantly. Quality of life had improved too; the patients were physically stronger, their appetites had returned, and they were sleeping better.

This is just one of the powerful natural supplements used in the Kidney Disease Solution. It proves that even when your kidney disease has progressed to the point of dialysis, there is still hope to restore your kidney health and your quality of life.

The Kidney Disease Solution is a step-by-step program for naturally reversing impaired kidney function and avoiding dialysis and transplant. It features: 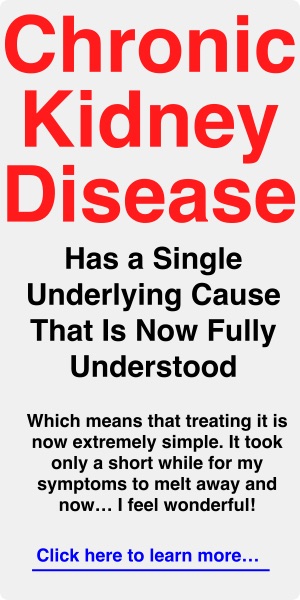